For classic witchy style, there is only one place to look. We have a stunning selection of Wiccan statues and figurines that will serve well the dedicated practitioner and the casual enthusiast both when it comes to bringing that intriguing touch of the spiritual and the occult to their home decor. The home accents in this section range from intriguing little diagrams delving into palmistry, phrenology, and reflexology to classic displays of iconic symbols that, in one way or another, represent Wicca, witchcraft, magic, and the occult at its best. Iconic statues of fun little witches as they go about their day are common fare here, bringing vivid color, awesome detail, and a bit of light-hearted fun to the typical witch design, just as elegant witch statues and sorceress statues are all common enough statues to find in this section, too. Some of the statues even depict adorable black cats, and many feature the classic pentagram, which is a symbol of elemental and spiritual power. This category is also populated with Triple Goddess and Hecate statues. Many of the statues are made from high quality resins and feature hand painted finishes which bring beautiful color and fine detail to each particular piece, ensuring that whether you go for fun or serious, instructive or whimsical, you will find a fine figurine or stunning statue, no matter what.
View Compare List
Sort by 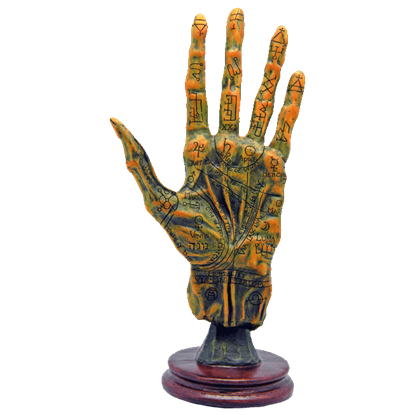 Item # 060-1916
Palmistry is an ancient art that focuses upon studying the hand with the intent to characterize a personality, as well as tell a future. This Alchemy Palmistry Hand is a sort of diagram that shows the hand and its different meanings.
$32.00 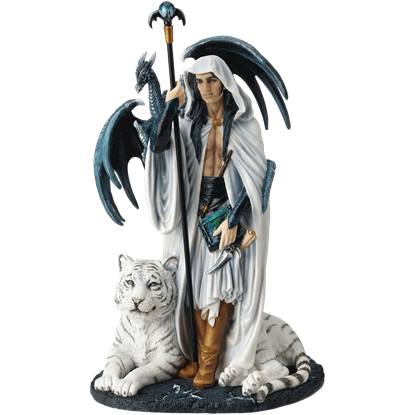 Item # WU-1712
According to its creator, the Arcana The Magi Statue By Ruth Thompson represents the learned side of magic. In the original artwork, a doorway appears above the wizard, displaying these words in Runic, What a Piece of Work is Man.
$89.60 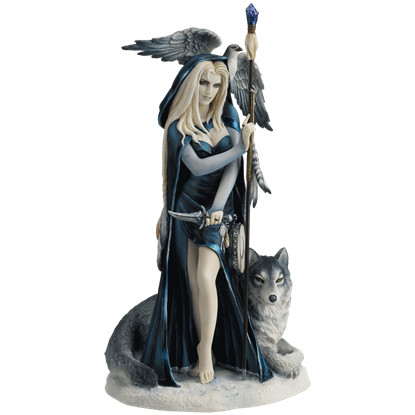 Item # WU-1713
The Arcana The Shaman Statue By Ruth Thompson belongs to a fantasy artwork collection inspired by the incarnations of magic found worldwide. According to Thompson, the statue possesses symbols that represent the naturalistic side.
$88.00 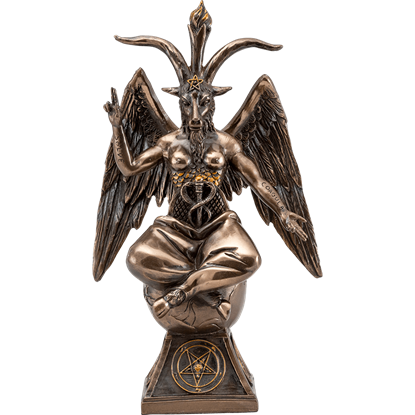 Item # CC9926
Baphomet came into interest with the Knights Templar as an occult figure they were accused of worshipping. The Baphomet Demon Statue reveals his form with the torso and arms of a man, head and legs of a goat, and feathered wings.
$48.00 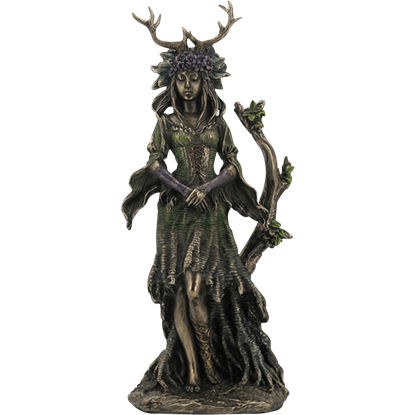 Item # WU-1488
Strolling within her woodland domain, this lovely nature deity appears at complete peace in her outdoors setting. The Bronze Guardian Goddess of the Trees Statue shows her with her hands clasped in front of her as she walks.
$50.00 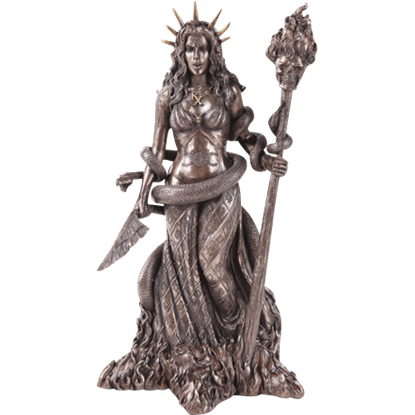 Item # CC11357
In the tradition of Ancient Greek religion, Hecate was a prominent goddess who was worshipped daily in Athenian households to bless the families who lived there. This Bronze Hecate Statue depicts the goddess with many of her symbols.
$50.00 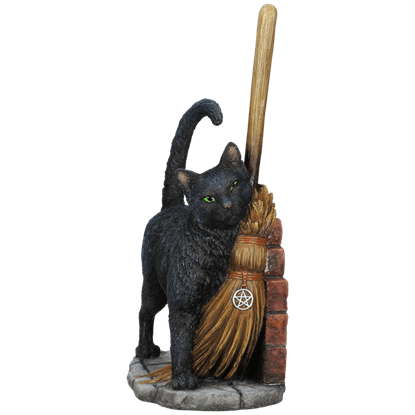 Item # WU-1849
Let this adorable witchs companion into your home and heart when you decorate with the Brush with Magic Statue. This collectible polystone statue depicts a green eyed black cat brushing up against its witchs trusted flying broomstick.
$60.00 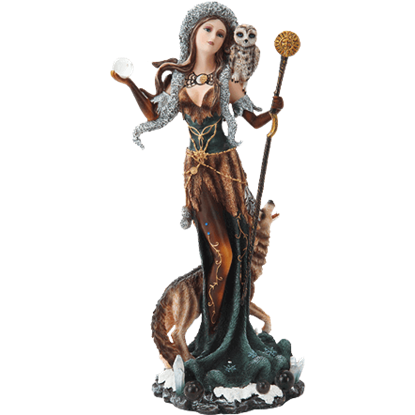 Item # CC10284
With the power of the sun by day and the moon by night, this witch casts her enchantments with the wisdom offered by the movements of the planets and stars. The Celestial Witch with Wolf Statue shows her with staff and crystal ball.
$56.00 $50.40 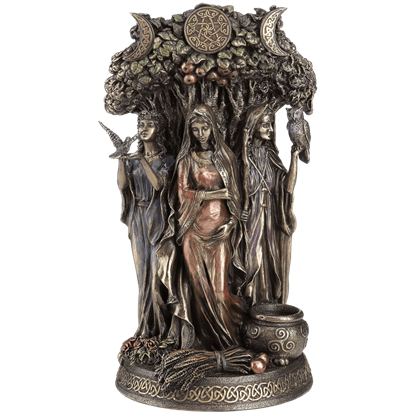 Item # WU-1798
Threefold in her forms, the Triple Goddess is here shown as the Mother, Maiden, and Crone standing around a mighty tree. The Celtic Tree Triple Goddess Statue is a magnificent display piece for those who appreciate its symbolism.
$60.00 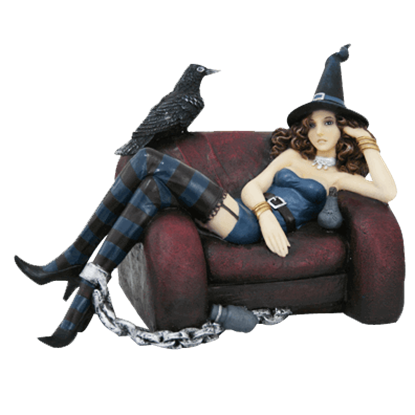 Item # CC9969
Though stereotypically portrayed as ugly crones, witches can sometimes appear in a youthful shape. The Chained Witch and Raven Statue depicts a lovely young witch with her crow familiar, chained to a couch.
$44.00 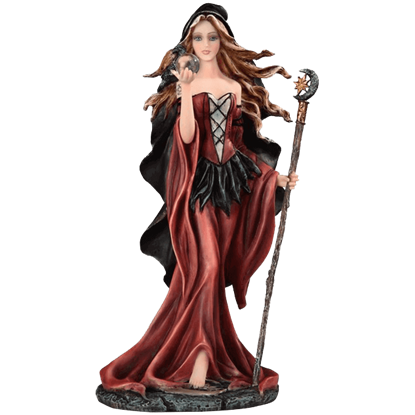 Item # 05-91910
The Dark Seeress Statue depicts an elegant witch who stands gazing into her crystal ball, a staff clasped in her other hand and a raven perched on her shoulder. This hand-painted fantasy collectible is made of cold cast resin.
$43.50 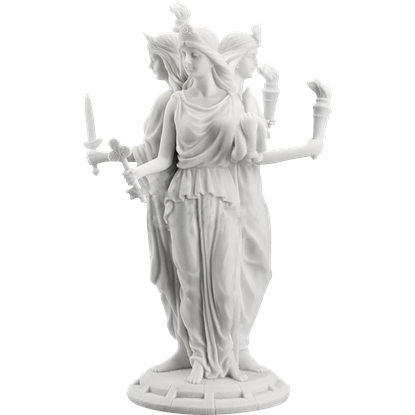 Item # WU-1527
Hecate is the goddess of magic, the moon, and crossroads, and she is believed to protect and bestow daily blessings upon the family she watches over. This Greek Goddess Hecate Statue will allow this deity to preside over your home.
$60.00