Have you ever wanted to see a Viking in action? Truth be told, it is not a common sight. But now you can not only see it, but immortalize that moment with a great statue or collectible! We carry a wide variety of Viking statues and collectibles that are perfect for decorating with, all of which demonstrate a stellar Viking design drawn from Norse history, lore, and legend. Some of our Viking statues depict the gods themselves, showing off the potential likeness of legendary deities like Odin, Thor, Loki, Freyr, Freyja, Frigga, and more. Some depict the gods during some of their more well-known legends, like Thor batting Jormungandr, while others depict the gods in a more traditional sense, showing their glory for all to see and enjoy. Other statues are dedicated to the men and women who worshipped them, depicting Viking warriors and shield maidens as they stand tall and as they battle. No matter the subject, though, these Viking statues are all made in quality materials like cold cast resin and cast bronze resin, while featuring an impressive level of detail that makes each one an impressive sight to behold. We also offer other Viking collectibles and home decor here, such as our variety of Viking wall plaques. You need not lack for Norse detailing or Viking decor when it comes to your mead hall or longhouse.
View Compare List
Sort by 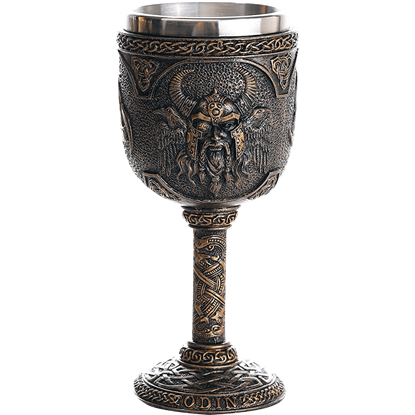 Item # CC11873
With an unquenchable desire to attain incredible wisdom, the Norse god Odin is among the most revered of the Asgardians, earning the title of All-Father. Now you can toast to the King of Asgard with the All-Father Odin Goblet!
$17.00 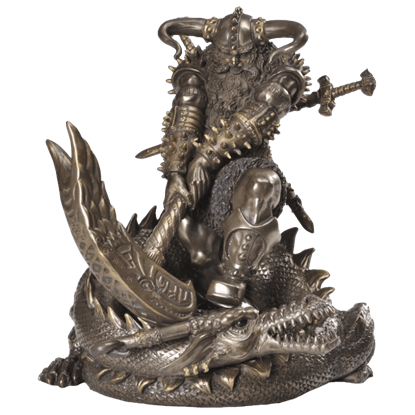 Item # CC8431
In Norse mythology, Ragnarok is the last battle that reduces the world to ash. During the battle, Thor is fated to fight his greatest enemy, the world serpent Jormungandr. This epic battle is depicted in the Battling Thor Statue.
$64.00 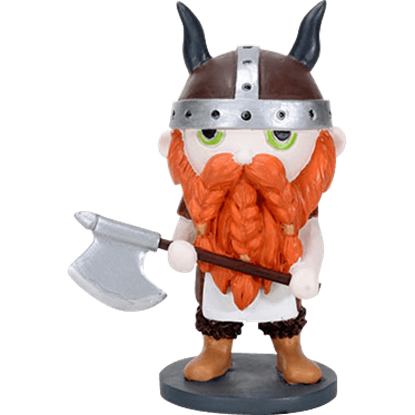 Item # SC9206
Mighty and miniature, the Bloodaxe Mini Norse Statue is perfect for showing off Viking warrior spirit anywhere. This Viking statuette depicts the adorable Bloodaxe the Viking with a horned helm, braided red beard, and axe in hand.
$13.00 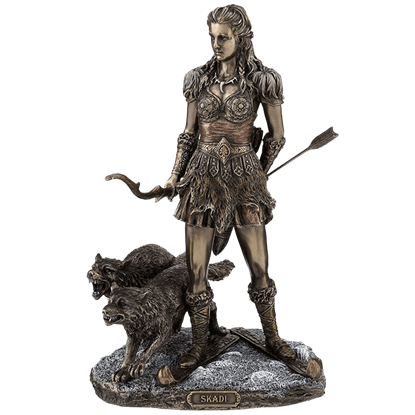 Item # WU-1674
A huntress goddess and giantess with a fierce independence streak, Skadi was happiest bowhunting in the mountains. This Bronze Skadi Goddess of Winter Statue depicts her hunting on skiis with two wolf companions.
$64.00 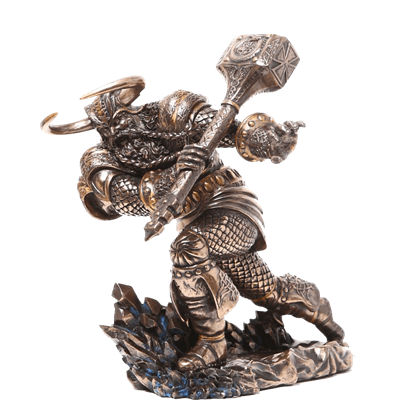 Item # CC8929
There is not a more well-known Norse god than Thor, the god of lightning, thunder, and strength. In the Bronze Thor Attacks Statue, this famous son of Odin charges across the ground, swinging his mighty hammer in a wide arc.
$60.00 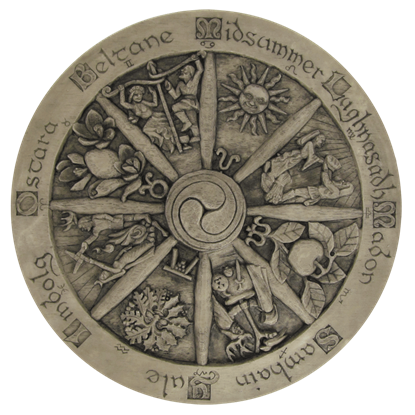 Celtic Wheel of the Year Plaque

Item # DD-131-WOY
In the pagan calendar, there are eight holidays, or sabbats, that are celebrated throughout the year. When you hang up this Celtic Wheel of the Year Plaque, you are not likely to miss any of them, as all are clearly depicted!
$64.99 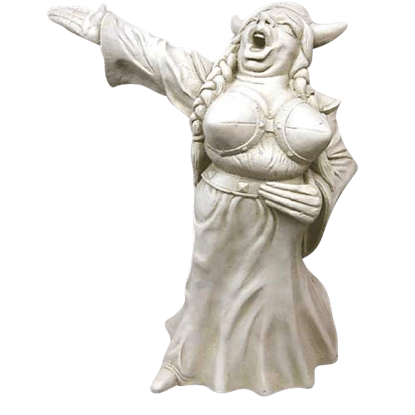 Item # OL-T39815
Make your garden, patio, or even interior home decor a stage for epic saga with the Fat Lady Sings Statue. This medieval fantasy statue depicts a Viking woman bursting into song, one hand held high as she aims for the high note.
$50.00 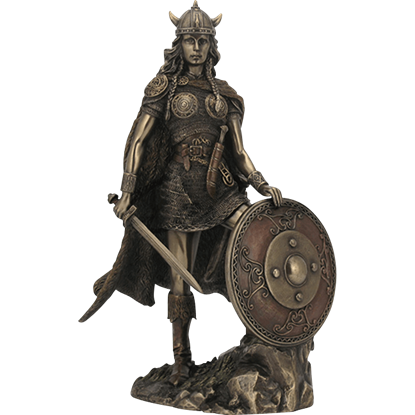 Item # WU-1486
Taking up sword and shield rather than bearing children, shieldmaidens exist within history and legend as some of the most well-known female warriors. The Female Viking Warrior Statue depicts one such figure in her armor.
$56.00 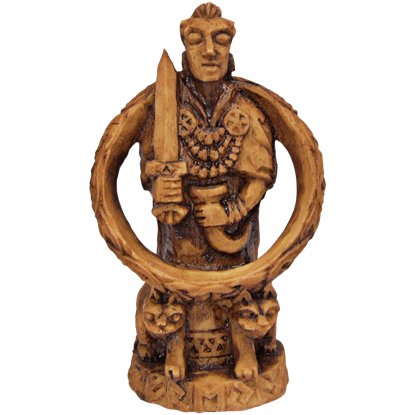 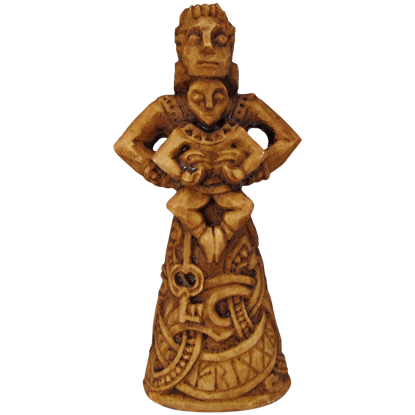 Frigga Goddess of the Hearth Statue

Item # DD-180-SWFG
Our Frigga Goddess of the Hearth Statue is a traditional interpretation of Norse artwork. Frigga, Odins wife, represents home and family by the child embraced in her arms and the key hanging from her waist in this unique statue.
$14.99 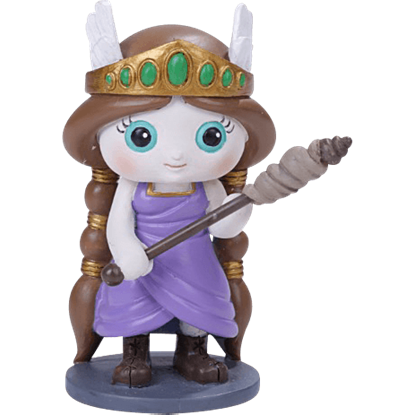 Item # CC13192
Frigga was known as the Norse goddess of wisdom and foresight. Honor her abilities by bringing the adorable Frigga Mini Norse Statue in to your home. Add some fun to statue collections and home decor with this cartoon-like statue.
$13.00 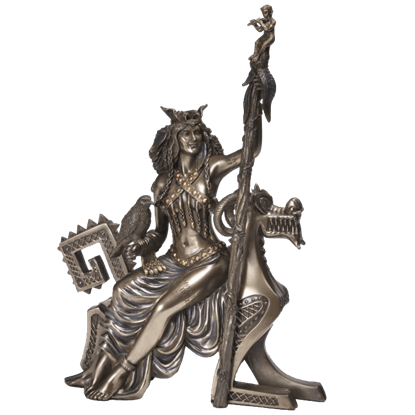 Item # CC8427
As queen of the gods and wife to Odin, Frigga was the foremost of goddesses in Norse mythology. In the Frigga Statue, she is depicted as a beautiful woman who wields a staff and sits atop a strange, beast-like statue as a throne.
$48.00