Game of Thrones Lord of the Rings The Hobbit

Thorin and his company of dwarves might have hoped for a peaceful journey, but they certainly did not embark on a journey to the Lonely Mountain without the proper arms to defend themselves. Here you will find their weapons as well as the memorable arms of other characters from Middle-earth, all recreated for your viewing and owning pleasure. Now you can own your favorite weapon that you saw used against the vilest denizens of Middle-earth. Orcrist, the legendary Elvish blade that Thorin claimed for himself, can be yours, and with it comes the same elvish look and feel that really makes the blade look like a peerless piece of elven bladework. Of course, we also offer Sting, the blade that Bilbo Baggins acquires around the same time that Thorin claims Orcrist and Gandalf claims Glamdring (which is also available here). Each of the blades, axes, and staves that you will find here are made from the finest materials, and each one is made to look like its on-screen replica (which in turn is designed to resemble the swords as they were described in the books that they are featured in). And more than just swords from the Hobbit, you will also find swords from the Lord of the Rings trilogy here, too, allowing you to own the arms of the warriors who came later! As far as Hobbit collectibles go, very little can compete with the look and feel of an awesome weapon, and those are exactly what you will find here when you take a look at our The Hobbit Swords section. 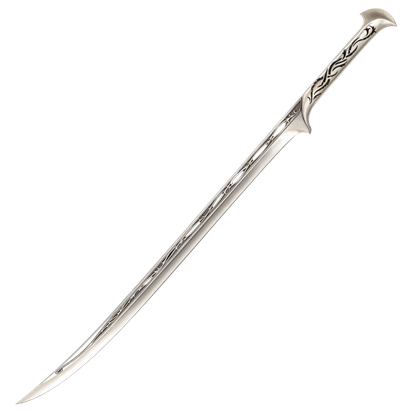 Item # UC3042
The Sword of Thranduil was a blade crafted for the king by the finest smiths of the Woodland realm. In his hand, it was steel death, wielded in a masterful way that few of the enemies of the king would have been able to see coming.
$360.00