For a level of protection that cannot be beaten, you will want to invest in one of Dark Knight Armourys metal full suits of armor. These suits of armor are modeled after the typical examples of plate armor that would have been common during the Late Middle Ages, and will give you both the protection and the look of a real knight in shining armor. These suits of steel armor and some of the finest in quality, providing an authentic look that will leave others speechless, as well as a high degree of protection that many opposing warriors will have trouble getting through. For a period of about 3 to 4 hundred years, plate armor reigned supreme as the dominant armor of the battlefield, being preferred by both cavalry and infantry. It was only the invention of flintlock that forced plate armor into a decline. Our suits of plate armor echo the look and feel of classic examples, ranging from the typical styles that were common all across Europe, including English plate armor, Gothic plate armor, and Milanese plate armor, as well as suits of armor that are modeled after the armor favored by certain kings, princes, and other noble dignitaries of those eras. As decorative as some of the suits of armor look, though, they are all fully functional and will provide you with all the defense you could want, whether you are participating in an SCA reenactment or a traditional LARP battle! You can also even wear them as costume pieces, just to give yourself the look of a true knight from the middle ages. And the best part is that we have a full suit of armor for every budget, ensuring that young squires can afford to get a set of armor that will keep them alive in battle, while fully-fledged knights and nobles can have the armor that befits their personal status and rank. So if you are looking for a metal full suit of armor to wear, then you will be happy to know that we offer just what you are looking for here at Dark Knight Armoury.
View Compare List
Sort by 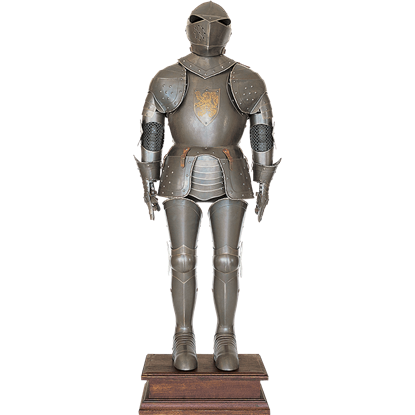 Item # ME-0024
Demonstrate your passion for European history with the breathtakingly beautiful 16th Century Aged Finish Full Suit of Armor. This is a wearable set of handcrafted steel armour which is made in Italy and exemplifies a Milanese style.
$4,252.00 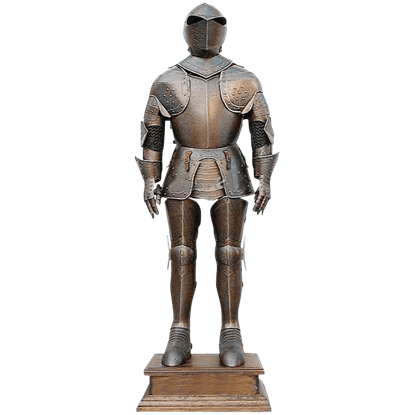 Item # ED6221
The armour of war is defined as the type of armour for combat that afforded protection to the vital areas of the body, yet was light weight and comfortable enough as not to tire a knight, nor constrict his freedom of movement in battle.
$7,460.00 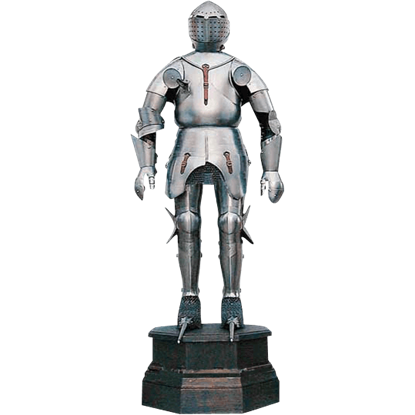 Item # ED6220
This very fine fully articulated and wearable reproduction of the 15th century armor belonged to German Noble, Fredrich I, Count Palatine of the Rhine. It is truly a sight to behold, showing off how artistic armour could be!
$11,400.00 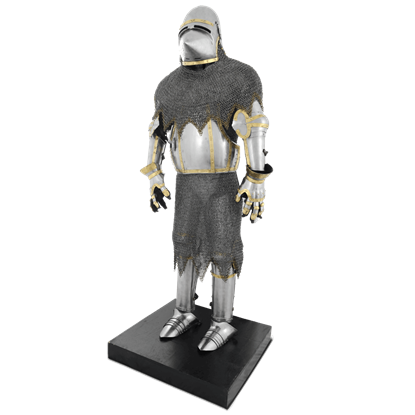 Item # AB0072
This fully wearable suit of armour is based on the famous harness housed in the Castle of Churburg. This armour is believed to have been made in Milan by armorers of the Missiglian family during the second half of the 14th century.
$2,149.00 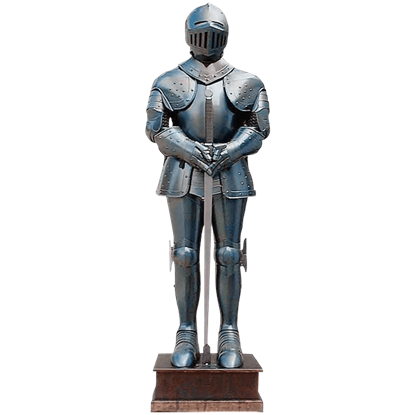 Item # ED6210
Italian armour has been highly sought after throughout the centuries by knights and nobility in Europe. Our reproduction Medieval Armour is crafted in the style of those master craftsmen who created the originals for kings and soldiers.
$3,798.25 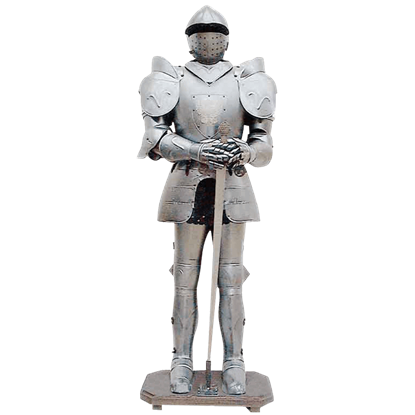 Item # ED6011
This stunning armour is adorned with a gold heraldic eagle on its breastplate. Standing about 6 feet tall on its wooden base, it is quite impressive and comes complete with sword. It is a glorious image of the medieval knights armor.
$2,848.25 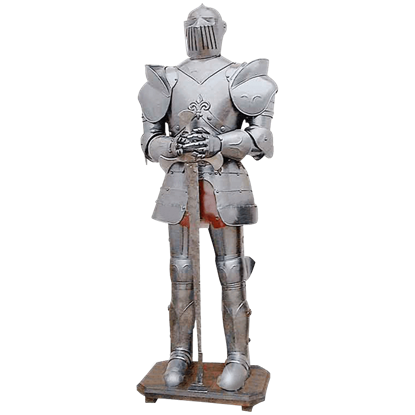 Item # ED6003
This impressive medieval suit of armour is styled after those crafted in Europe during the mid 1500s. The suit of armour features a fine decorated breastplate, broad guarded pauldrons, and an antiqued finish for an aged appearance.
$2,848.25 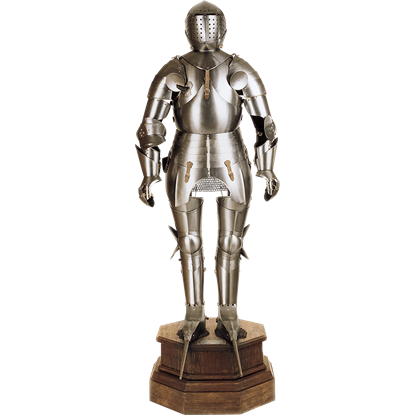 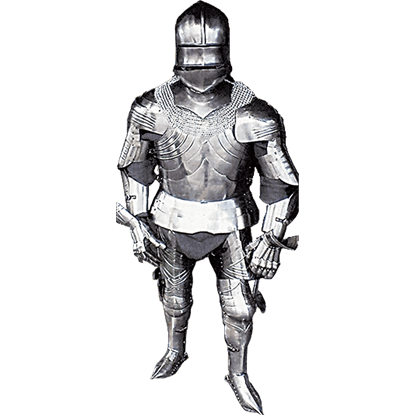 Item # AB0024
A fully articulated and wearable harness in the German Gothic style of the late 15th century. Armour of this type is generally sleeker fitting and less rounded than Milanese armour of the same period, thanks to its terminating points.
$1,949.00 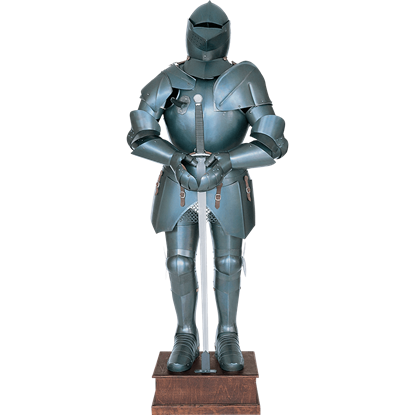 Item # ME-0036
Enjoy a sample of fine Italian armor in the famed styling used in the late 15th century with the Knights Jousting Full Suit of Armor. This wearable suit of armor is designed to resemble the armor of a 15th century Venetian commander.
$3,268.00 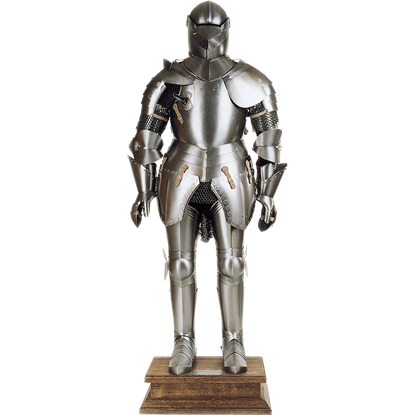 Item # ME-0025
Italian armorers were industry leaders during the Renaissance era, known for their exceptionally high quality plate armor. You can experience this historic master craftsmanship first hand with the Men At Arms Full Suit of Armor.
$7,170.00 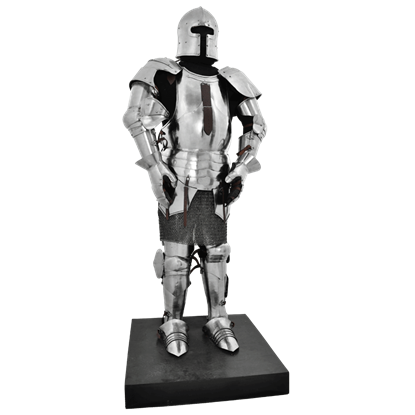 Item # AB0063
This Milanese harness displays the characteristic robust and rounded appearance of armour produced in northern Italy throughout the 15th century. Armour of this type incorporates large and smooth glancing surfaces in its construction.
$2,499.00