Patriotism is not just a word to casually throw around or show when it suits you. We definitely do not mind showing that we are patriotic to the core! Here, you can find all manner of All-American shirts that are designed to pay homage to the men and women who signed up to serve with the United States Armed Forces. Many of these military t-shirts are ridiculously awesome with intricate graphics that are sure to impress. Some designs even use a touch of humor to ensure they stand out. Whether you are interested in the Army, Marines, Air Force, Navy, or Coast Guard, you will find a great patriotic shirt among our array of mens graphic tees. Perfect for veterans and civilians grateful for the service of our soldiers, these armed forces t-shirts make great gifts, as well.
View Compare List
Sort by 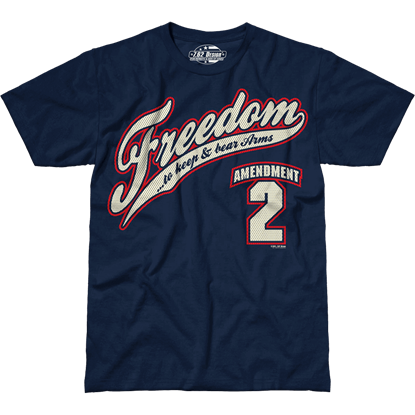 Item # 762-501-475
The rights in the Second Amendment often stir up controversy whenever discussed. Wearing this 2nd Amendment Freedom Premium T-Shirt will show the world what team you are batting for as you take a stance in defense of firearms.
$19.95 $17.96 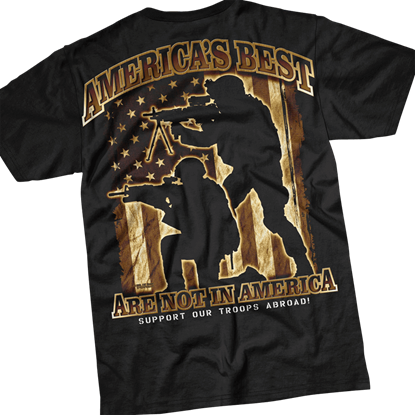 Support the various American armed forces by wearing this patriotic shirt. The Americas Best T-Shirt points out that our best and bravest are not here in the States but rather are sent abroad in wars and on other foreign missions. 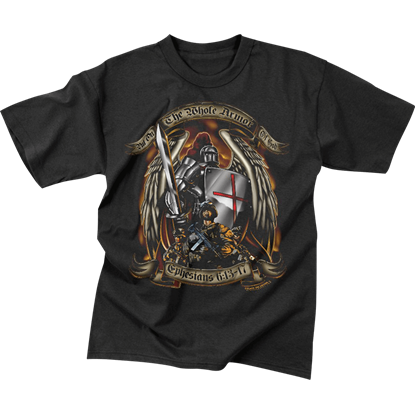 Item # RO-80435
Faith has always guided men into war and with the stylish Armor of God Military Shirt you can channel this power force. With an original design and comfortable fabric this item can become a treasured addition to your current wardrobe.
$20.00 $18.00 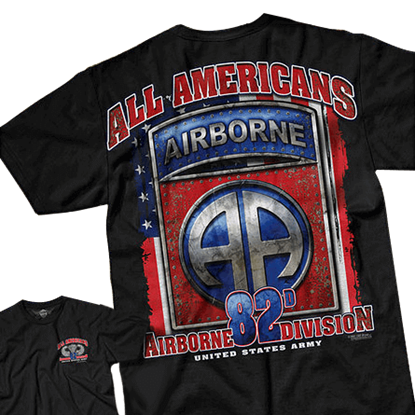 Item # 762-501-340
Show off your patriotic spirit and pride with the Army 82nd Airborne All American T-Shirt! This black t-shirt displays the double-A airborne division symbol surrounded by text in bold red, white, and blue along its back.
$17.95 $16.00 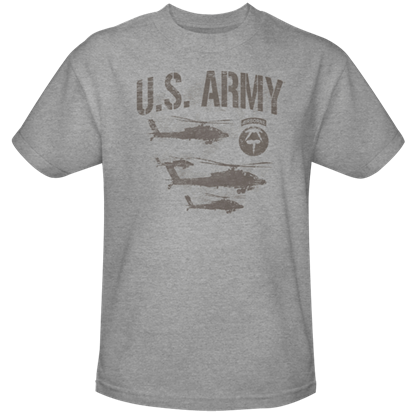 Item # ZB-3962
Operating paratrooper missions and training the soldiers who are the first in from the sky, the US Army Airborne are an elite group. Show your pride in this group with the comfortable and stylish Army Airborne T-Shirt.
$26.00 $23.40 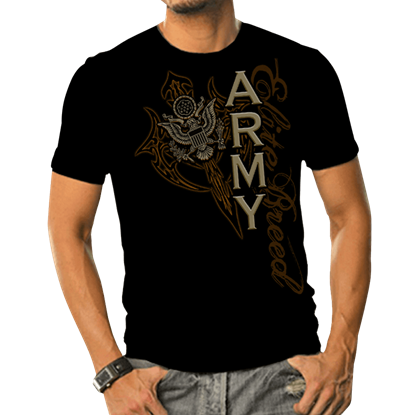 Item # ER-THM061
Celebrate the United States Army with the stunning Army Elite Breed Axes T-Shirt. On the large back graphic of this t-shirt, an Army insignia appears over a golden colored tribal cross and framed by a pair of wicked medieval axes.
$21.95 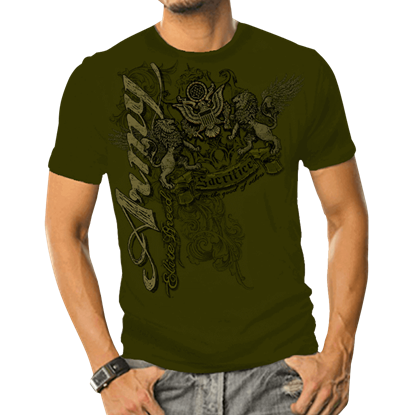 Item # ER-THM064
With the might and regality of a lion, the United States Army protects the freedom of the country. The Army Elite Breed Lions T-Shirt features an Army logo surrounded by winged lions and ornate details on both sides of the shirt.
$21.95 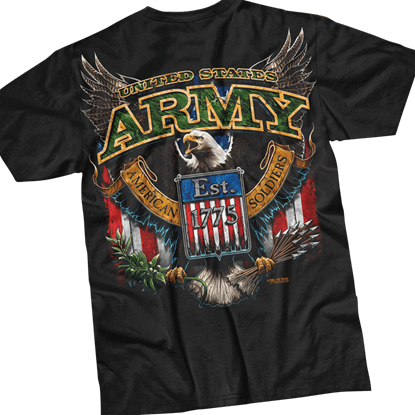 Item # 762-501-369
This Army Fighting Eagle T-Shirt features a colorful and detailed Great Seal of America design that screams freedom loudly to any who see it. The only thing louder is, perhaps, a resounding army chorus of Hoooah!
$17.95 $16.00 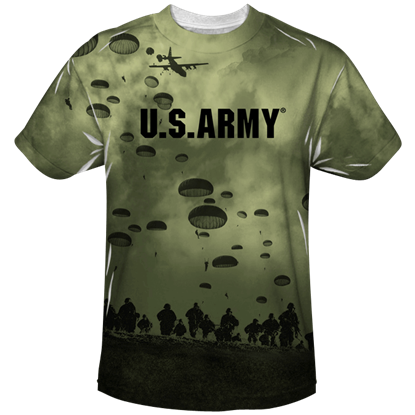 Item # ZB-2020
Dropping in to defend freedom the Army Strong T-Shirt gives a fantastic scene of the U.S. Army doing what it does best. Those who have proudly served will instantly recognize the scene depicted on this stylish and comfortable t-shirt.
$32.50 $29.25 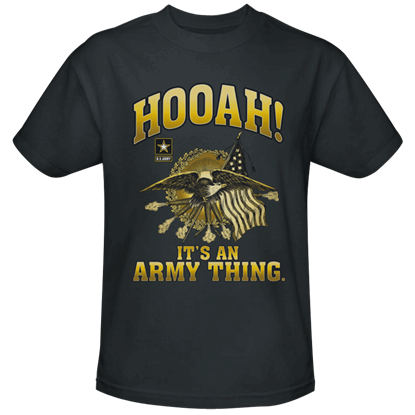 Item # ZB-3981
For a comfortable shirt that is full of gusto pick up the Army Thing T-Shirt. HOOAH! Those who have served know the importance of a chant and how it brings a group of people together and ignites strength into their hearts.
$26.00 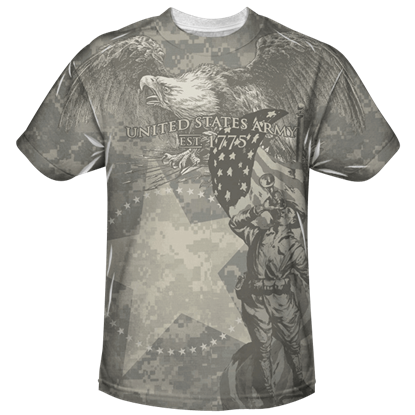 Item # ZB-2021
The U.S. Army is the largest and oldest branch of the U.S. Military, celebrate this freedom fighting force with the Army Tradition T-Shirt. This unique t-shirt boasts a stunning design to proudly represent the U.S. Army.
$34.25 $30.83 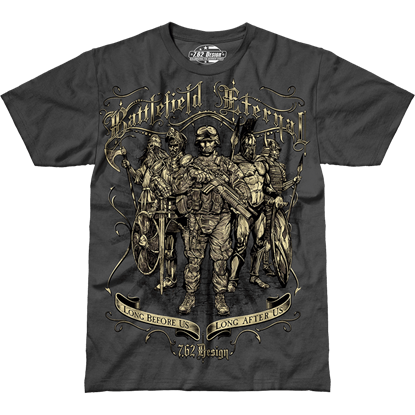 Item # 762-502-434
The battlefield has long been occupied by warriors who stand ready to fight and die for god and country. The Battlefield Eternal Jumbo Print T-Shirt depicts five warriors from historical periods together, united by their service.
$24.95 $22.46