Our selection of Greek statues gathers up the many gods, goddesses, heroes, monsters, and creatures of Greek history, legend, and mythology. Finely detailed and painted or accented by hand, we offer an incredible range of Greek sculptures and statues here, many featuring antique bronze tones that result in a stately accent that will suit any home. If you find yourself captivated by the tales of ancient Greece, then our Greek statues are certainly a sight to see. We offer Greek Titan statues as well as statues of many of the most famous gods, like Zeus, Hades, Aphrodite, and Athena, as well as some Greek deities you might not yet know. We also offer Greek statues that depict the mythical beings, like centaurs, gorgons, the Minotaur, Pegasus, and more. This is the place to find all the high quality statues that will bring the stories of ancient Greece to life. 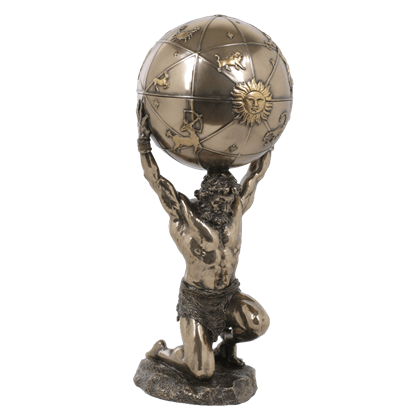 Item # WU-1155
When Zeus and other Olympian gods waged war with the Titans, Atlas chose to stand with his Titan brothers and sisters. As punishment, Zeus condemned him to hold the sky apart from the earth, as seen in this Atlas Trinket Box.
$56.91 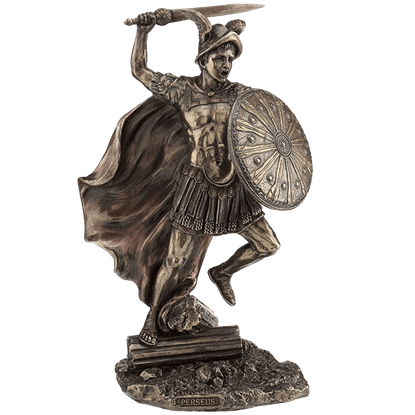 Item # WU-1649
Shown in the midst of battle, Greek hero Perseus leaps forward over broken columns. He wears gleaming armour and a winged helmet. Display this Battling Perseus Statue with any of his foes to create an epic scene from Greek mythology.
$48.80 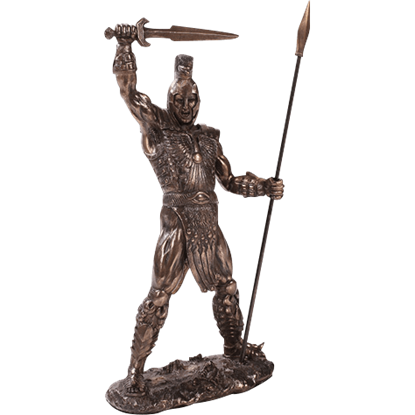 Item # CC10871
Before his death by Paris in the Trojan War, Achilles was known as one of the greatest warriors and heroes of Greek mythology. Commemorate this soldier before his tragic fall in your home or office with this Bronze Achilles Statue.
$48.00 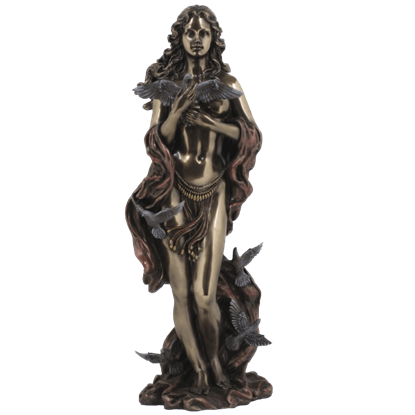 Item # CC7542
As the Greek goddess of love and desire, Aphrodite is associated with the pursuit of love and beauty. In the Bronze Aphrodite Statue, she is pictured as a lovely young woman who stands tall and serene while the wind plays with her hair.
$50.00 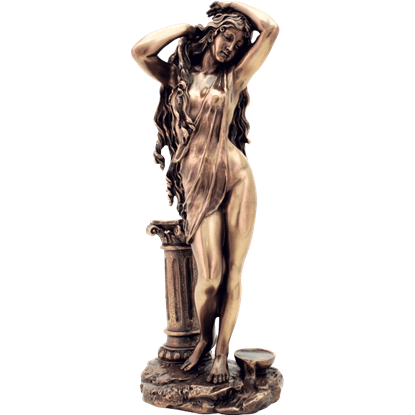 Item # TL-3231
People will fight for many things, but they will often only kill or die for love. The Greeks recognized this powerful force, revering it so highly that they gave it a deity. Bring some romance into your home with the Bronze Aphrodite Statue.
$56.25 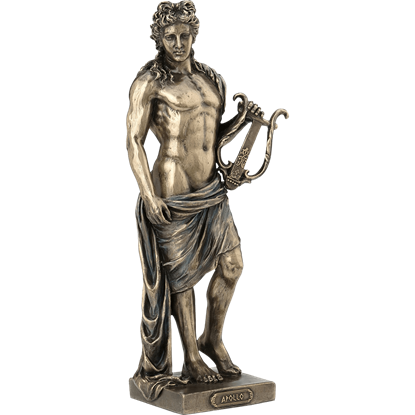 Item # WU-1918
One of the most important Greek gods was Apollo, who made life possible by carrying the sun across the sky each day and blessed humans with music. With the Bronze Apollo Statue, you can honor this mighty deity and his accomplishments.
$40.00 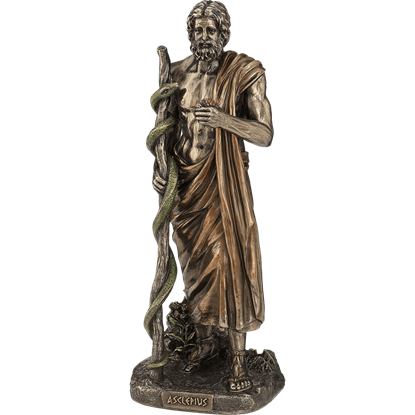 Item # WU-1894
Medicine is a crucial part of human existence, keeping us healthy and alive. It is no wonder, then, that medicine is so revered by so many cultures. With the Bronze Asclepius Statue, you can show your appreciation for the medical arts.
$49.00 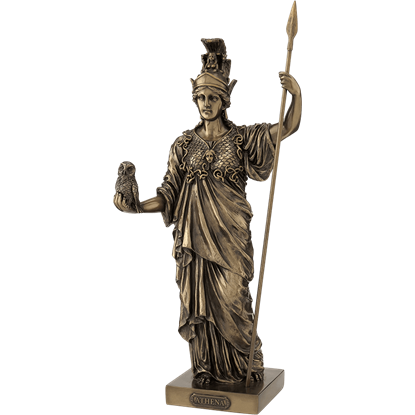 Item # WU-1764
The Greek goddess Athena embodied wisdom, courage, strategy, justice, law, the arts, and more. A shrewd companion of heroes, she was the goddess of heroic endeavor. This Bronze Athena Goddess of Wisdom and War makes a stunning gift.
$54.00 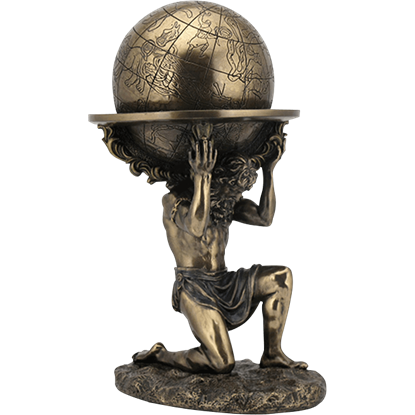 Item # WU-1507
Punished for supporting the Titans in the war against the Olympians in Greek mythology, Atlas received the punishment of forever holding the celestial spheres in place, as seen in the Bronze Atlas Carrying the World Statue.
$48.00 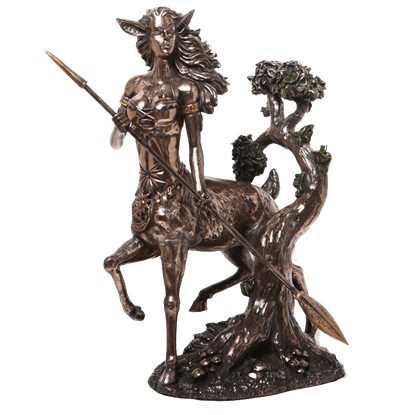 Item # CC8927
The dryad was typically a spirit or being associated with trees. Most were shy, feminine creatures that avoided contact. In the Bronze Dryad Statue, though, this dryad appears bolder and is more willing to defend her chosen tree.
$60.00 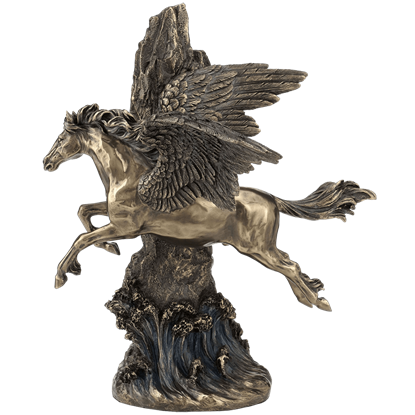 Item # WU-1809
Over the waves, this winged horse soars. The Bronze Galloping Pegasus Statue depicts the creature of myth and fantasy posed in a jump with wings outspread. Made of cast bronze, this collectible statue has an incredible antique look.
$93.00 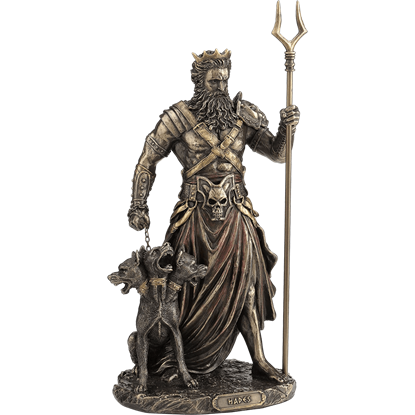 Item # WU-1914
In Greek mythology, the Land of the Dead is ruled by the stern and powerful Hades, who is often seen with his three-headed watchdog Cerberus. The Bronze Hades Statue depicts this mighty Greek god and his pet in lifelike detail.
$58.00