If you find yourself fascinated by the world of ancient Greece, whether through the histories that describe the culture or the tales from Greek mythology, our Greek statues and collectibles are ideal for decorating your home in the style of ancient Greece. From cast bronze statues and busts of the Greek gods, goddesses, heroes, and monsters, to ancient Greek wall decor, trinket boxes, ash trays, and collectible coins, we offer a vast array of historical Greek and Greek mythology gear here. Our Greek statues and sculptures show off deities like Zeus, Poseidon, Athena, Hades, and more, as well as heroes like Achilles, Perseus, and Ajax, among others, as well as creatures like Medusa, Pegasus, the Minotaur, and Cerberus. Whatever the root of your interest in Greek history, culture, and myth, you are sure to find something to catch your interest here. 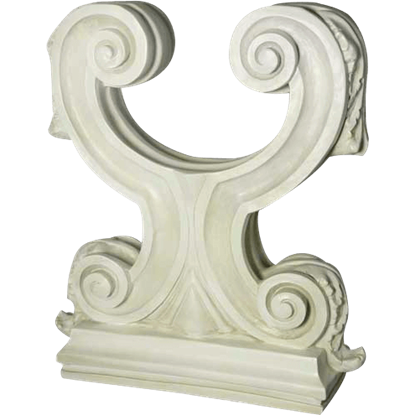 Item # OL-F8447
The acanthus leaf was an iconic aspect of Greek and Roman architecture. Bring this beautiful historic motif to your own indoor or outdoor decor when you use the Acanthus Double Leaf Table Base to create your own unique table.
$300.00 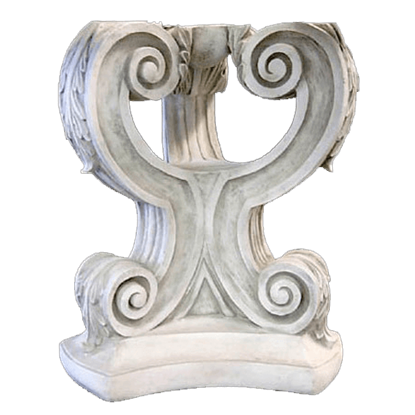 Item # OL-F9303
The Acanthus Leaf Table Base brings the beauty of Greco-Roman architecture and artistry to your home or garden. This historical table base has scrolling limbs with acanthus leaf details adding a natural touch to the decadent design.
$600.00 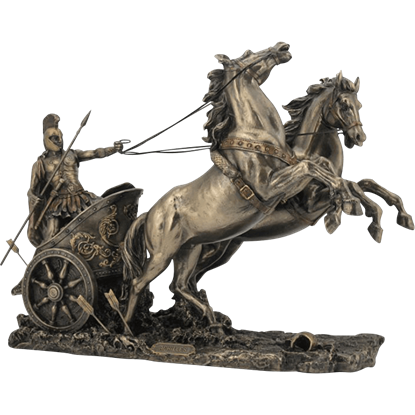 Item # WU-1528
The most notable warrior of the Trojan War and the hero from the Iliad, Achilles was virtually indestructible except, of course, for his heel. Capture the iconic soldier as he rides into battle with the Achilles with Chariot Statue.
$130.00 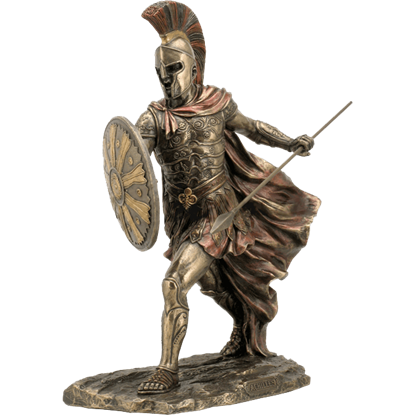 Achilles with Spear and Shield Statue

Item # WU-1332
Capture the greatest fighter of the Trojan War with the Achilles with Spear Statue. Crafted from cold cast bronze, this statue can be paired with a Hector Statue (WU-1331) to create an epic mythological battle scene.
$64.00 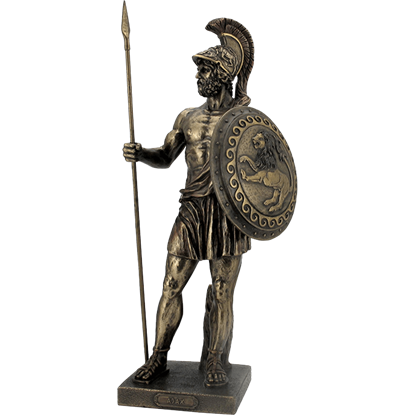 Item # WU-1338
Ally of Achilles and Odysseus, Ajax fought Hector to a draw and was one of the greatest warriors in the Trojan War. Ajax stands proud and noble in the striking design of our cold cast bronze Ajax Statue.
$58.00 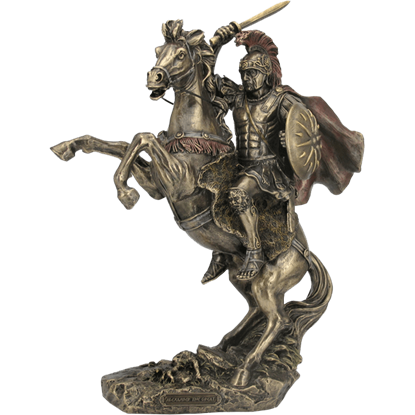 Item # WU-1321
Alexander the Great was a man of action who conquered the known world. Take home inspiration with the Alexander and Bucephalus Statue. This statue depicts Alexander on his horse as they ride into the midst of battle.
$80.00 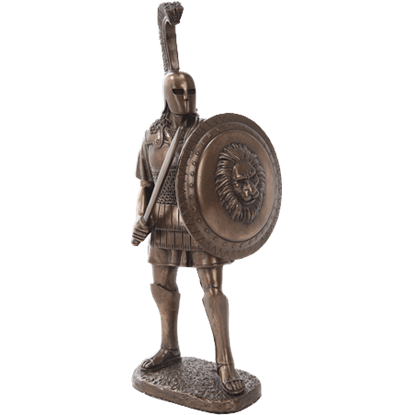 Item # CC10200
Alexander the Great amassed one of the largest empires of the ancient world, conquering from Greece through Egypt and modern day Pakistan. The Alexander the Great Statue depicts this undefeated ruler in his armor.
$48.00 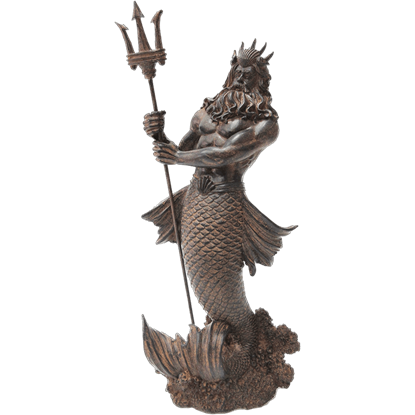 Item # CC12595
When the Greek gods toppled the Titans, they divided the realms among the three most powerful brothers. The god Poseidon, who was given domain over the sea, has been artistically rendered in the Antiqued Poseidon Statue.
$24.00 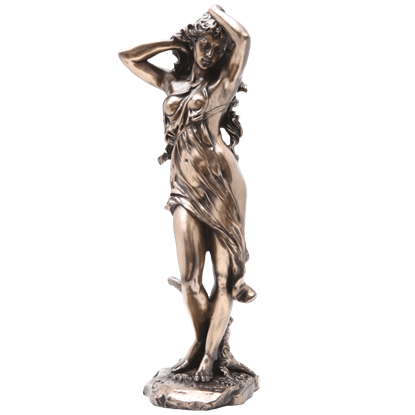 Item # CC8844
As the Greek goddess of love, desire, and beauty, Aphrodite was seen as the most beautiful and desirable woman in existence. Here, the Aphrodite Statue captures the idea that among the goddesses, none were as beautiful as Aphrodite.
$50.00 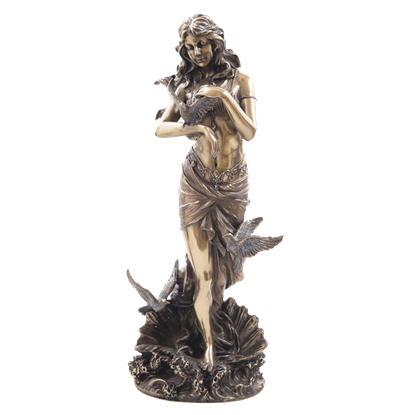 Item # WU-1131
A Grecian goddess of love and beauty, Aphrodite was the subject of many artistic pieces, including paintings and sculptures. This Aphrodite With Doves Standing on Sea Shell Statue is a statue that represents this goddess quite well.
$49.40 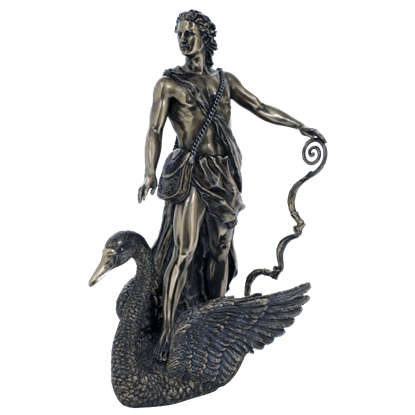 Item # CC7849
The son of Zeus and Leto and twin brother to Artemis, Apollo is one of the most important and diverse of the Olympian deities. The Apollo Profile Statue depicts the Greek god in stunning, hand painted detail on cold cast bronze.
$49.50 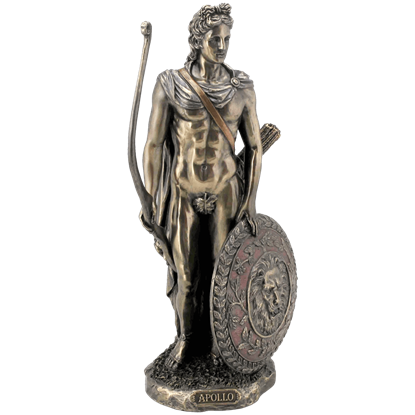 Apollo with Bow and Shield Statue

Item # WU-1633
The son of Zeus and Leto and twin of Artemis, Apollo is the patron of Delphi and one of the most important deities in classical mythology. This Apollo with Bow and Shield Statue makes a splendid display on any shelf or table.
$58.00