The lands in the novel series A Song of Ice and Fire are extremely detailed. Author George R. R. Martin has left little untouched when it comes to Westeros and Essos, and that includes the fine touches like currency and coinage. And now, we are happy to offer to you a selection of stunning Game of Thrones coins that are licensed by the author himself to this amazing novel series! Each and every one of the coins found in this section are struck, which means two things for each coin. First, each and every coin is unique. Second, the coins carry an old-world style that is utterly unbeatable when it comes to collectability! The coins mimic the currency of the realm of Westeros, as well as other nations from the novel series. You can find copper pennies, stars, stags, and dragons, all featuring the faces of figures that appear in George R. R. Martins novel series, both as main characters and as characters from the lore. We have coins from House Stark, House Lannister, House Baratheon, and of course, the long-ruling House Targaryen! We even have the infamous iron coin given to a certain Stark by a Faceless Man! Any of the Game of Thrones Coins you will find here are sure to make for cool collectibles. The only question you have to answer is, which one do you want to get first?
View Compare List
Sort by 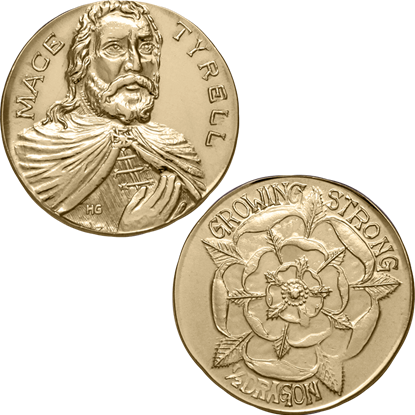 Item # GOT-84
Head of House Tyrell, Lord Mace plays an important role in A Song of Ice and Fire by offering his daughter Margaery to marry King Joffrey. Own a collectors item honoring this noble family with the Mace Tyrell Golden Half Dragon.
$8.00 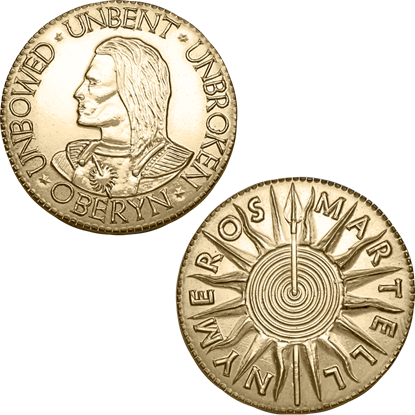 Item # GOT-85
Known for his speed and skill with a sword, Oberyn Martell is a hot headed prince with a quick with who is popular among the women of Westeros. The visage of the Red Viper prince is cast on this Oberyn Martell Golden Half Dragon.
$8.00 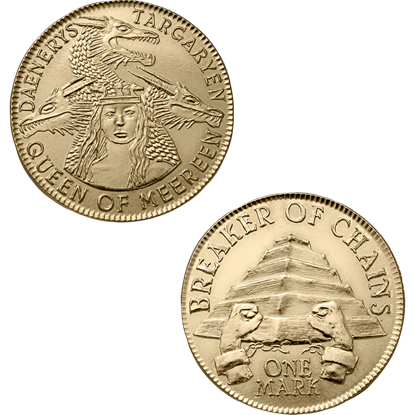 Item # GOT-87
Once an extremely profitable Slaver City, slavery became abolished in Meereen upon Daenerys Targaryen taking reign as queen. Show your admiration for Daenerys Stormborn, Breaker of Chains with this Queen of Meereen Golden Mark.
$8.00 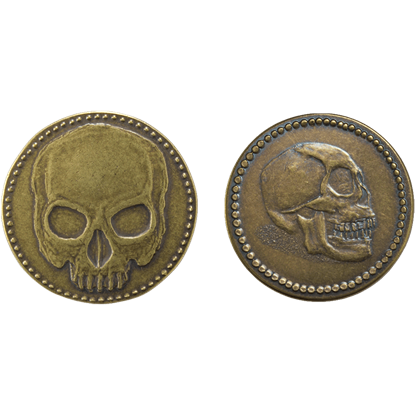 Item # GOT-122
The oldest of the Free Cities, Volantis is governed by members of the two political parties, the merchant elephants and the warrior tigers. This Set of Volantis Honors struck in brass features coins minted by each ruling party.
$18.00 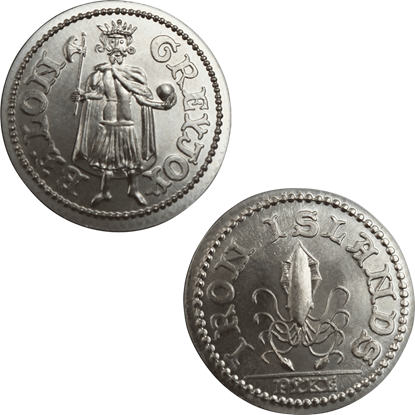 Item # GOT-13
Many kings have coins minted in their likeness, and the ruler of Pyke in the Iron Islands, is no different. This Silver Kraken of Balon Greyjoy emulates the stag of Westeros but with a more sea-born style that befits the Ironborn.
$20.00 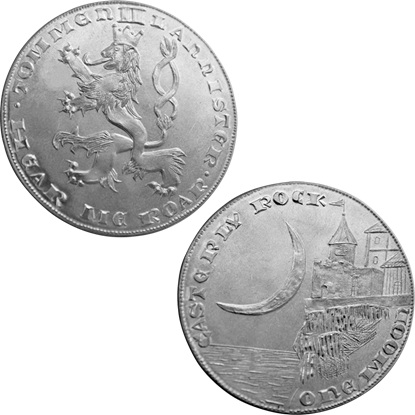 Item # GOT-17
A Lannister always pays his debts, and for good reason. In Westeros, the Lannisters hold several gold mines, making them the wealthiest family. This Silver Moon of Tommen II Lannister is struck in fine silver, with a Westerosi style.
$105.00 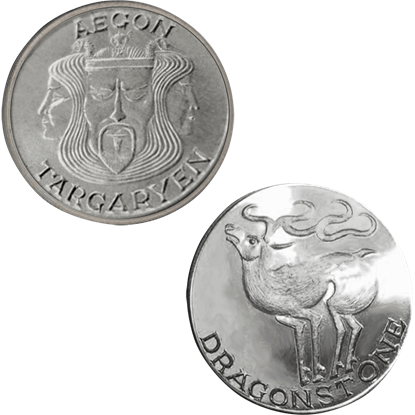 Item # GOT-11
Perhaps the first unified currency of Westeros came about via the Targaryens in their conquest, led by Aegon I. This Silver Stag of Aegon Targaryen immortalizes not only his likeness, but also his sisters Rhaenys and Visenya as well.
$20.00 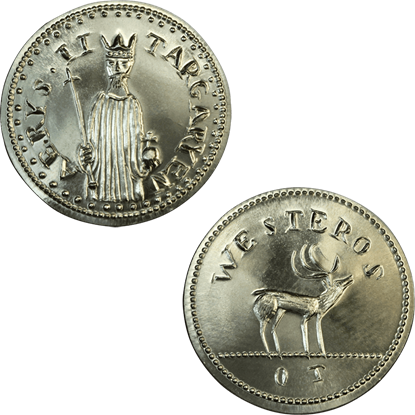 Item # GOT-12
Kings and coins have long been associated with one another. When a king is crowned, a new coin is often minted in their likeness. This Silver Stag of Aerys II Targaryen is a coin that features the likeness of the last Targaryen king.
$20.00 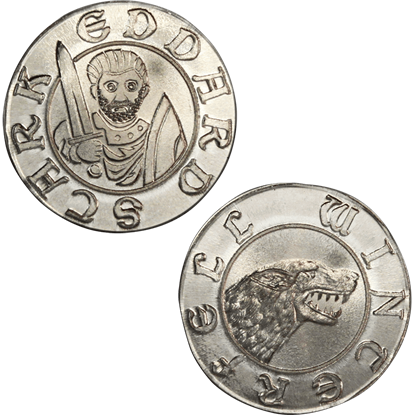 Item # GOT-15
Made in the fashion of early Nordic coins, this Silver Stag of Eddard Stark creates a coin fit for Westeros, one as inspired by history as by fantasy. As it is licensed by George R. R. Martin, it is certainly a collectible to have, too.
$20.00 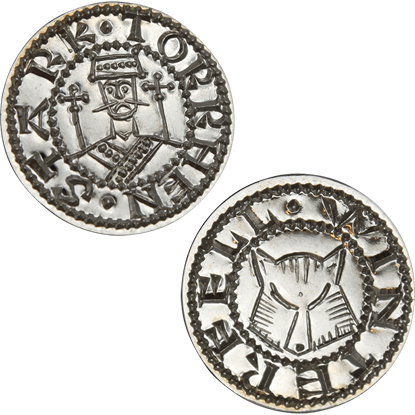 Item # GOT-14
Before the Targaryens conquered Westeros, each of the seven kingdoms had their own coins. This Silver Stag of Torrhen Stark is based out of Winterfell, and recreates the common coin of the realm in fine silver for any to enjoy.
$20.00 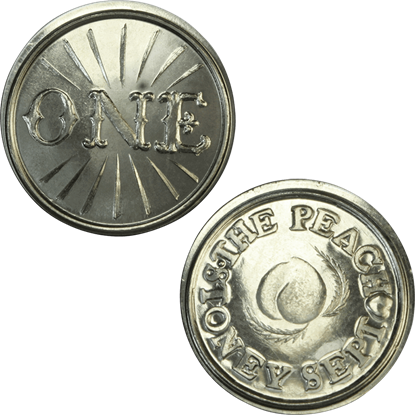 Item # GOT-19
Not all silver coins are currency of the realm. Some are a bit more shady. The Peach Silver Brothel Token is based on the tokens used at a house of ill-repute, found in Kings Landing and frequented by Tyrion Lannister.
$20.00 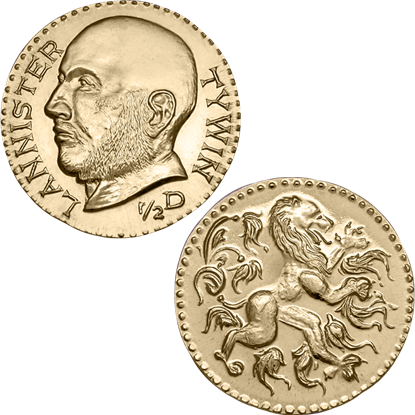 Item # GOT-82
The wealthiest man throughout Westeros, Sir Tywin often boasted that a Lannister always pays his debts. As money is a very important aspect of this family, no true Lannister would be without the Tywin Lannister Golden Half Dragon.
$8.00